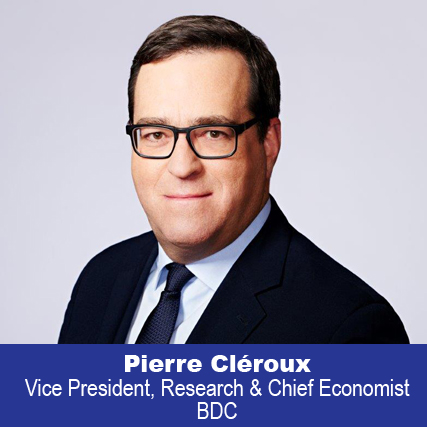 Pierre Cléroux was appointed Vice President, Research and Chief Economist at BDC in 2012. Pierre leads a team of experts who analyze economic data to identify business and sector trends impacting Canadian entrepreneurs. A seasoned speaker, he regularly travels across the country to help business owners understand the risks and opportunities presented by the economic environment.  Mr. Cléroux is also responsible for providing economic analysis and advice to the Bank’s senior management team, and supervises all marketing and industry research activities.

Over his 25-year career as an economist, he has held several influential positions that had a direct impact on entrepreneurs in Canada and abroad. Before joining BDC, Pierre worked for the Government of Saudi Arabia as Vice President, Business Analysis in the National Industry Clusters Development Program. His role was to create program strategies, define sector policies and conduct financial and economic analyses of industrial projects.

Previously, Mr. Cléroux was the Quebec Assistant Deputy Minister for Economic Development, Innovation and Export Trade, responsible for the implementation of economic policies and programs to support small and medium-sized businesses and encourage entrepreneurship. He was also a strategic advisor for Montreal International, where he was responsible for attracting foreign investment from India and the Middle East, and developing international relationships and partnerships. He worked for 12 years at the Canadian Federation of Independent Business in various roles, including economist and Quebec Vice President.

He holds a Bachelor of Arts and a master’s degree in Economics from Laval University, as well as an MBA from the MIT Sloan School of Management. 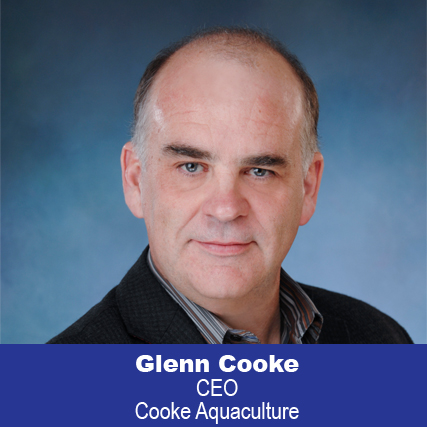 Glenn Cooke is CEO of Cooke Aquaculture Inc., a family-owned salmon farming company, that was established in 1985 by Glenn, his brother Michael and their father Gifford. They started small, with a business named Kelly Cove Salmon, running a single marine site containing 5,000 salmon.

Over the years, they pursued aggressive growth, focusing on acquisitions and species diversification. Cooke Aquaculture is now vertically integrated and the largest private seafood farming corporation with operations in Atlantic Canada, US, Chile, Scotland, Spain, Honduras and Nicaragua.

Glenn is a strategic leader, having developed and grown a successful Atlantic Canadian business with his family, and surrounding himself with hard-working, dedicated employees. The company deeply values community giving and provides ongoing support to a wide array of individuals and organizations including shelters, food banks and wild Atlantic salmon conservation partnerships.

Cooke Aquaculture understands that its relationship with the environment is vital to their business.  The company depends on a healthy marine environment for growing and harvesting seafood. In 2008, Cooke became North America’s first salmon farming company to be certified by a third-party eco label. The company has continued to strive to meet various third-party certifications throughout its New Brunswick and global operations.

Glenn has negotiated numerous acquisitions and provides oversight to the global group of Chief Executive Officers, General Managers and Management teams within the Cooke family of companies which now employs over 9,000 people and includes US and South American wild caught fisheries.

At $2.4 billion in annual revenues, Cooke earned the #1 spot on the SeafoodSource list of Top 10 North American Seafood Suppliers and their employee loyalty reaffirmed them as one of Canada’s Best Managed Companies for the 14th consecutive year. Cooke Aquaculture was recently recognized as the top private growth company in Canada by Grant Thornton and the Canadian Chamber of Commerce.

additional panelists to be announced 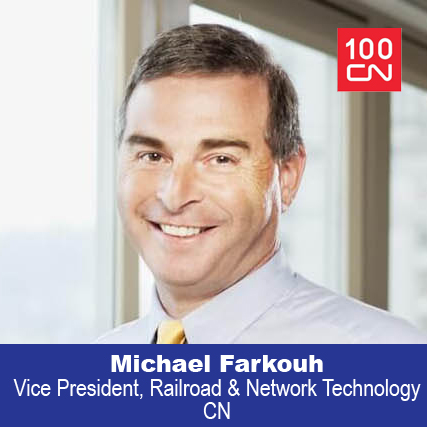 Michael Farkouh is the Vice-President, Railroad and Network Technology Deployment, based in Montreal. He was appointed in April 2019 and as a key member of the Information and Technology team, is responsible for the deployment of next-generation scheduled railroading technology.

Mr. Farkouh started with CN in 1989 as Officer, Division - Mechanical. Over the years, he has held various positions in both the operations and manufacturing fields including: Manager Planning, Car Fleet Maintenance; Regional Mechanical Officer – Eastern Canada; Superintendent Operations – Greater Montreal; and General Manager Operations in several locations including the Great Lakes Division, Greater Toronto Division, Champlain and B.C. South. In November of 2012 he was promoted to Assistant Vice-President – B.C. South following by Vice-President, Safety and Sustainability in April 2013, and Vice-President, Eastern Division in April 2015.

Mr. Farkouh holds a Bachelor of Engineering Degree from McGill University and has 26 years of experience in the transportation sector. Mr. Farkouh has had extensive experience in both the operations and manufacturing fields of this industry. 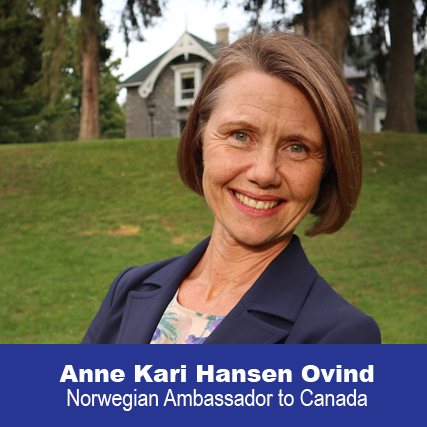 Anne Kari H. Ovind is Norway’s Ambassador to Canada. She has served in the Ministry of Foreign Affairs for more than 20 years. Most of her career has been in the field of security policy, including Arctic affairs, bilateral relations with Russia and NATO affairs. From 1999-2002 she served at the Norwegian Delegation to NATO in Brussels. She also has extensive multilateral experience from responsibilities within climate change, sustainable development and management of natural resources in the Ministry of Foreign Affairs. Prior to her posting to Canada, her work has focused on implementing Norway’s Arctic policy.